Brain Entrainment And How It affects Your Brain

Physicist Heinrich Wilhelm Dove first discovered binaural, auditory beat simulation in 1839. And found that when two generated tones, signals of different frequencies were presented separately one to each of your ears; your brain detects the phase variation between them and attempts to reconcile the difference. As these two frequencies move in and out of phase your brain creates a third signal called a binaural beat, equal to the difference between the two frequencies.

When your brain begins to resonate to the binaural beat, or “follows” the beat you'll experience the Frequency Following Response, where your brain is triggered to resonate at that frequency, a phenomenon that was researched and tested in 1973 by biophysicist Gerald Oster at Mount Sinai Hospital in New York City. Oster’s research and others on binaural beats and the Frequency Following Response has paved the way for further development in the area of auditory stimulation to enhance brain functioning.

Neuroscientists recently discovered a correlation between an increase of alpha brain waves, either through electrical stimulation or meditation that has the ability to reduce depressive symptoms and to increase creativity. Your brain will typically produce one of five small rhythmic electrical pulses, patterns that can be observed using an electroencephalograph (EEG) scanning equipment.

Beta waves are most present  when we are consciously awake and during periods of concentration, activity, anxiety and arousal.

Alpha waves are linked to creativity and the state of relaxation and mindfulness.

Theta waves are associated with the right brain as well as subconscious thinking, deep relaxation, mental imagery and meditation.

Delta waves occur during periods of deep dreamless sleep and are linked to healing, recovery and pain relief.

For brain entrainment recordings to be able to work effectively where your brain can create a binaural beat and to experience the frequency following response, the wearing of stereo headphones is essential. 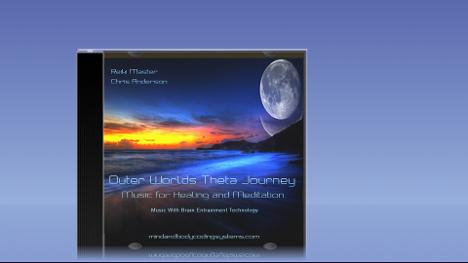